So go the opening lines to The Front Bottoms’ Twin Size Mattress.

FB are a band who remind me of home: of tired drives to work (and elated drives back), of Ross and Beth and Andy in Glasgow, of my brother Mully blasting their records from his room (doing what teenagers do best). For me, listening to Twin Size Mattress is a bare-knuckle-hook to the temples with a fist of happy memories and friendship.

That’s just a wee bit of context for you there, which I hope might go someway to explaining the significance of my using these lyrics to set this up. This entry is about friends, and about the crazy beautiful universe of the backpacker in which they can be found.

If you’ve been following this pish, you’ll have already heard a great deal about the people I’ve met along the way. In advance then, my apologies, there may be some repition. But I can’t help it, honestly, I can’t.

You see, at the start of this trip I held the friends I made on pedestals of  marble and gold leaf and I carved their images out of wood and wore them on chains round my neck. That’s how rare I knew them to be. Three weeks in though, I’m further down the rabbit hole of travelling, and this is what I’ve discovered:

Friends like these are far from rare, in fact, they’re an innate, crucial part of the lifestyle.

This isn’t to say that the friends I’ve made aren’t unique. I’ve met some truly incredible people (as you may well already have read). I just mean that travelling solo, or in general, travelling as a backpacker, includes, like some sort of combination big-mac holiday package 2-for-1 deal, these friendships.

It’s hard to explain. I think it’s hard to explain because it’s so incomparable. If you’ve been to Uni and lived in halls, it might be easier, if not, I’ll do my best. Your first couple weeks of that first year of Uni – away from home for the first time, thrown together with a bunch of misfits, cut off from familiarity in any sense of the word – you are forced, essentially, to make super intense relationships with those around you, often in a matter of hours.

In part I feel this is convenience, in part your potentially-like-minded-radar going instinctively  into hyperdrive, but mostly, it’s survival. Travelling has only 3 major differences:

Have you ever heard of such a life?

For a while after I first saw the above for what it was, I’ll admit I was sceptical. Was there a catch? Did the perpetual motion of this instrument erase its history as it turned? Are there only so many faces my mind can store with such short notice?

But then I stopped worrying, because I suddenly saw that there was no pretense attached to what was being offered here. Unlike Uni, where scared wee kids promise each other life-long bonds the first time they meet, travellers offer only what they can: the pleasure of their company for as long as the two (or more) of you should be together.

And because of how ridiculously easy it is to make friends on the road – easy because of the lack of pretense – you have no need to worry, as I originally did.

It doesn’t matter if I forget Scott and his baldy-beardy face, nor the faces of his pals, who I shared a smoke with on the roof of our Rishikesh hostel last night. What matters is, their company came freely, and made those few hours of travelling all the more enjoyable.

AKA Jugaadus Eco Hostel, Amritsar. AKA my home away from home. AKA the first place in India I’ve stayed longer than intended, not because I couldn’t get transport out of there quick enough, but because I didn’t want to leave.

Amritsar is a beautiful city, for sure. But it was the people who kept me there. I rocked up to the hostel, as I said in my last post, after 24hrs of bus, shattered and feeling useless. Didn’t matter. As easily and with the same relief you feel from slipping off your shoes or (I imagine) your bra at the end of a long day, I was welcomed in as part of the Jugaadus family.

Some people had been there 2-3 weeks already; others, like me, had just arrived. Didn’t matter. Part of the family. People came and people went; same story.

I hung out with so many people at Jugaadus, including the staff – my Sikh brother Jaroop, creepy Gopi, and the unforgetable Sanjay. We milked buffalo, crashed a Punjabi wedding, cycled round the city, mud-wrestled, ate good food, got unforgivably drunk (and all of us paid the price of a three day hangover). And like the song says, when the flood water came, and I was getting down on myself, my man August was there with words of wisdom and kindness. He helped me swim. 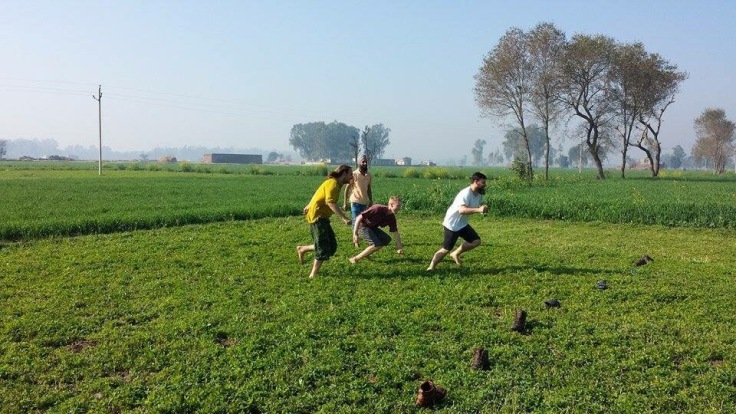 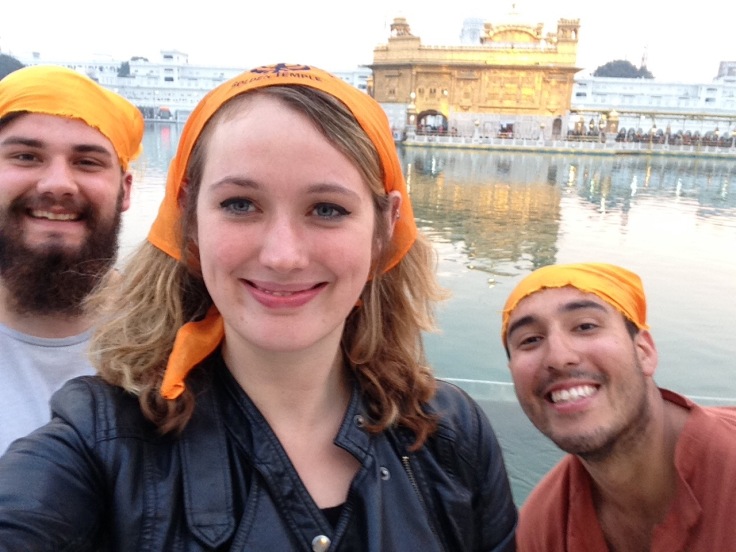 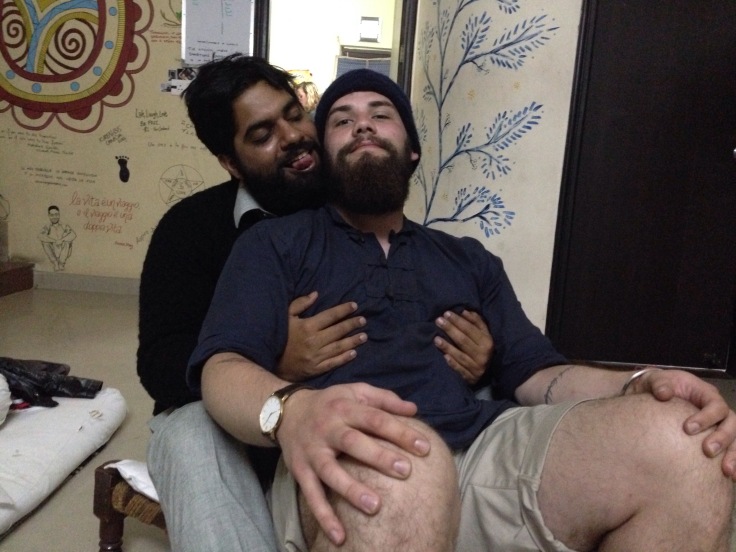 Man, just writing about that place and those people makes me a little sad. For five days, it really was home.

I painted a haiku on the roof terrace before I left, attached a  dedication to those who made my stay there so memorable.

This is a wildly different story, just to prove that even the shortest and most random of encounters can stick with you.

So right now I’m on the bus to Delhi, having left Rishikesh this morning. I had only two days in Rishikesh because my flight from Delhi’s tomorrow, which kinda really sucks, because I don’t wanna leave India, and I certainly didn’t wanna leave as stunning and genuinely peaceful place as Rishikesh.

Anyways, I met some cool kids at the hostel and we hung out for dinner and chai and so on, but the hostel was no Jugaadus, and two short days were too few to find family. Instead I spent more time by myself, walking and hiking around the river Ganges and then up into the mountains.

It was on my last day, and during the latter of these expeditions, that I met las tres chicas, Hannah, Anna, and Martina.

We met half way up the trail towards a set of waterfalls we’d all heard about on the grapevine. Very quickly and very comfortably I fell in with them.

Stopping occasionally by pools of gently rushing water, to cool ourselves off from the steep hike, we chatted incessantly, conversation coming very easily, very naturally. Accompanied by breathtaking scenery, we made it first to the largest of the waterfalls, and then on to a luscious farming village atop the mountain.

Eventually we turned back, and before two of the girls left for their train outta there, we sat and talked over a late lunch at their hostel’s cafe.

I had such a lovely day with them, one which I’d originally set out quite happily to conquer alone, but which ended in the company of three new pals. 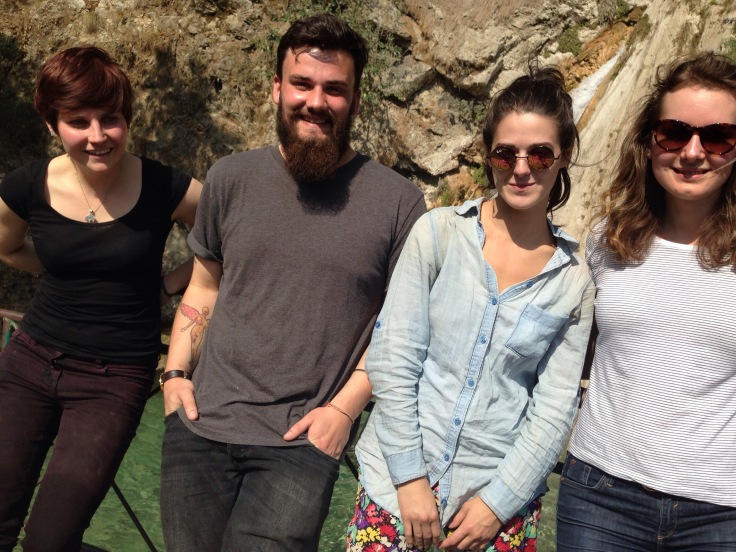 It’s crazy, exciting, heartbreaking, promising, and I am fucking loving it. I don’t doubt I’ll see many of the faces I’ve left behind again, in the not so distant future, and I cannot wait.

In fact I’m meeting Jaisalmer Jules tonight in Delhi for drinks, just to prove my point.*

This is for the lions, for all the cubs I’ve met out here, and for all the old guard back home who continue to keep me afloat daily.

With love from a bus in the middle of god knows where, C x

*Just back from hanging with Jules. Had some insanely good food (actually had two dinners), and then hit up The Piano Man, a suave wee jazz bar with an incredible atmosphere. A good end to India indeed. 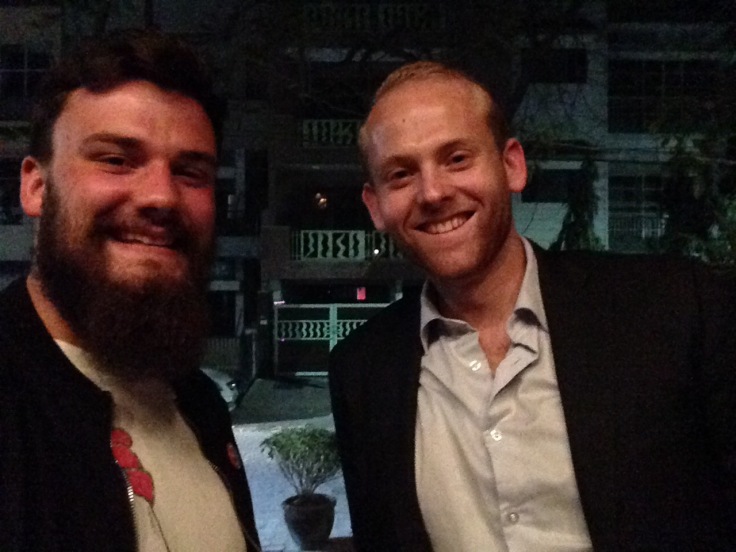 3 thoughts on “This is for the Lions”

Hey @mrcutyohair, I finally wrote something for ya... go check yer emails 😘
Kazuo Ishiguro - An Artist of the Floating World (16.08.21)
Would ya believe it, ya gal's went and done it. Top Rated on Upwork as one of the platform's most consistently succesful freelancers 🎉🏆🥳
Eiichiro Oda - One Piece (c.01/08/21)
Here's an example of a really fun article I was commissioned to write recently by travel, lifestyle and culture blog Nomad Paradise.
Michael Palin - Around The World In 80 Days (25.07.21)