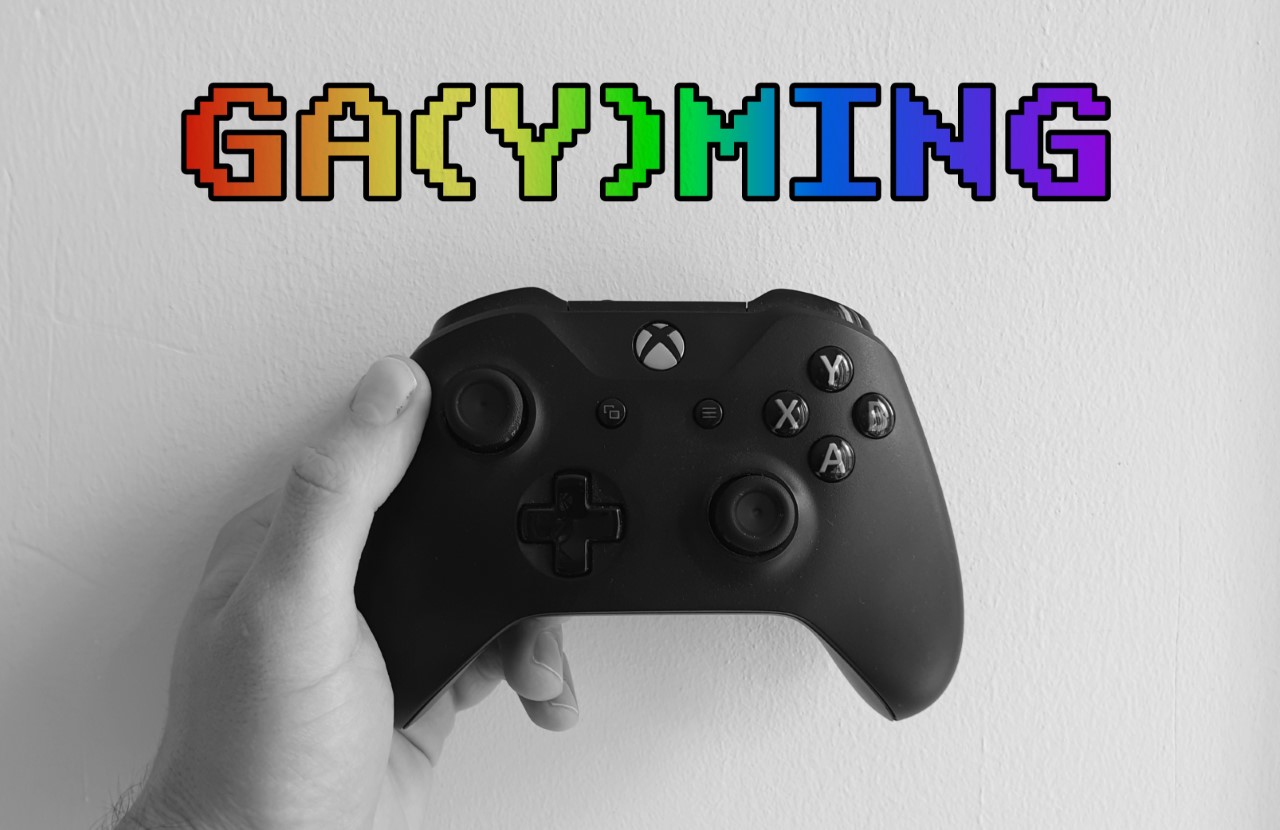 How gaming created the space for me to be queer, before I knew I needed it.

“I want to be honest with her. So if she feels the same about me, there won’t be any surprises.”

So says my spaceship engineer Parvati; a quiet, considerate lass I bumped into when trying to procure a new engine for my ship – she was looking for some adventure, and I happened to be leaving town. Now, she’s met someone: another engineer (another woman). But she’s worried. She’s worried that Junlei Tennyson, chief-engineer aboard the Groundbreaker, won’t understand her asexuality.

Not that Parvati fully understands it, either. All she knows is that, so far, she’s yet to meet someone who will give her the space she needs, to be the woman she is. In Junlei, she thinks she might finally have found that someone.

I’m playing The Outer Worlds, an immersive RPG set in the Halcyon Colony – a dystopian galaxy in farthest space, where you awake after a 70-year spell in cryo-sleep. My character’s name is Jahanara Khan, one kick-ass female captain you do not want to mess with. And as I’m playing, engaging with a mostly-female cast of enemies and allies, encouraging the growth of an asexual-lesbian-partnership between my in-game companion and her sweetheart, I get to thinking.

This is not the first game in which I’ve actively chosen/created a female character for myself, not the first game in which I’ve worked to enable same-sex relationships. In fact, it’s not the second, third, fourth, nor the fifth. The Outer Worlds is simply the most recent in a long-line of games – from Pokémon Crystal and The Sims, through Fable and Skyrim, to Mass Effect and Hellblade – which appealed to a deeper part of me. A part I always knew existed, but, like Parvati and her asexuality, I never quite understood.

I’ve been a gamer since early childhood. I remember the jealousy and intrigue which wracked my five-year-old body, to see my pal clutching his Pokémon Yellow special-edition Game Boy. I remember receiving a PS1 for Christmas a few years later, and completing Disney’s Hercules-tie-in videogame over, and over, and over. (I was always fascinated with those stylistic swirls on Herc’s elbows; or was it his biceps which caught my attention?) I remember the endless twilight hours lost to The Sims, which I played on our family computer. (I wondered what would happen if I tried to make two male characters kiss, with the same gleefully-chaotic abandon that I wondered what would happen if I instructed my character to go swimming, before removing the ladder from the pool…)

And I remember on my twelfth Christmas being gifted an Xbox 360 Arcade – the portal to a higher dimension of gaming; the door to Fable II, Mass Effect III, Skyrim, and Fallout III, games in which I could be whoever I wanted to be, could go where I wanted to go, and form relationships with whomsoever I wanted. Games I was playing, when in real life I was a boy in High School: playing rugby, experiencing puberty, kissing girls, going-out with girls, talking about girls (jeez, boys are vapid), and yet which waited for me, so that when I got home at the end of the day I could retreat to my room, power up my console, and dive once more into my ulterior-life as bisexual female-hero of the magical realm of Albion, courting wives and slaying monsters as I went.

And yet, for the longest time in life, in my mind I was a boy. A straight boy, at that. I may never have been particularly masculine – my sister will attest to my love of fairy-princess costumes, and dressing up as Robin (never Batman – I mean, the signs were there early) – but for me there was little doubt: I was a man who liked women.

So why, then, did I prefer to play as female characters? Why did non-normative relationships in games so strongly attract my attention?

The answer is obvious to me now: a little over a year ago I came to the realisation that I am in fact queer. The terms ‘non-binary’ and ‘pansexual’ probably being the closest I could come to describing my queerness. But back then, I simply didn’t question it. Not in a repressed sense – I’ve been fortunate enough in life to have a family and friends who love and support me, and who would no matter what. I think, rather, I just understood that pretending to be queer and/or female in a fictitious setting was something I enjoyed; it appealed to a deeper part of me, made me feel comfortable and free, moreso than I ever did, when playing as a dude.

And don’t get me wrong, I’ve played as my fair share of dudes! It’s hard to be a gamer in this hetero-patriarchal world and not control your fair share of white-ass, straight-ass, grizzled, gun-toting, womanizing male characters. Some of my very favourite games of all-time have had such leads (Halo, Final Fantasy, The Witcher, Red Dead). But even within these games, the opportunities as a queer person for self-exploration are boundless.

And it comes down to this: unlike with TV shows, books, theatre, or film, in gaming you control your character; and a basic element of this process is empathising with, and, in a sense, becoming them.

For example, if I’m playing as Geralt in The Witcher, then from an objective standpoint I am a mutant sword-for-hire with a killer sixpack and a thing for the ladies (the witchier, the better). But to me as a gamer, Geralt is infinitely more than that. For Geralt is a vehicle; a fantastical, werewolf-slaying lens for an infinite variety of people to see themselves through. Let’s say I’m a trans-person, experiencing body-dysmorphia and with no-one in the real world I feel I can safely talk to; then to me, Geralt may pose the chance to play as the rugged, masculine man I see myself as, or to have the sorts of relationships I can only dream of. If I am a lesbian, bi-, pan- woman, then perhaps my focus during that weird sex-on-a-stuffed-unicorn scene is not on Geralt’s naked bod, if you catch my drift.

But then, even to speak of the gendered and sexual elements of any given game is too restrictive. Because ultimately what is so empowering, so emancipating about gaming for me is that no matter my angle, no matter who I am, I can be anyone. Whether the character I play, or the way I play as that character is representative of me or not, gaming provides me the space to experiment. Like high-fashion runway looks, I can try on the craziest outfits, and whilst I may never wear them exactly like that on the high street, I can take elements of what I wear, what I explore, and apply them to my personal life as I see fit.

Add to this notion the burgeoning number of game developers who are actively writing engaging, thoughtful, nuanced storylines for queer and female characters, and you have a whole world of interactive gameplay in which queer people can safely and limitlessly explore themselves, can experiment with who they are or who they want to be, perhaps even long before they realise that’s what they’re doing.

Playing The Outer Worlds the other day – fully feeling my fabulous feminine self as intergalactic starship captain Jahanara Khan – it finally dawned on me. My whole gaming-life has been an extension of my real-life exploration of self. My whole gaming-life I have gravitated toward RPGs (role playing games, the kind in which you can be a literal cat-burglar, if you like; thank you Skyrim), because they allowed me to endlessly test out who I was, without having to worry about the real world implications.

Gaming provided me the space to be queer, until one day I realised I was.

Hiromi Kawakami - People From My Neighbourhood (09.06.21)
Spending this afternoon editing an old story for @storiesfromthehearthpodcast. Believe I wrote the first draft of this back when I worked for @mainstreethare, when on my lunch.
Haruki Murakami - First Person Singular (02.06.21)
Anyone else get a perma-headache when spring turns to summer? Anyone else get an extra dose of SAD come the lighter days, as if winter depression werni enough?
I wrote about what the vastness of space and the meaninglessness of everything 'means' to me, and how the notion that all hope is lost gives me... hope.
Iain M. Banks - The Excession (04.05.21)